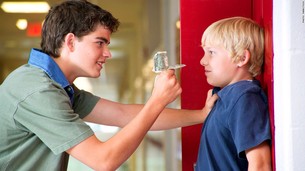 Bullying is the use of force, threat, or coercion to abuse, intimidate, or aggressively dominate others. The behavior is often repeated and habitual. One essential prerequisite is the perception, by the bully or by others, of an imbalance of social or physical power, which distinguishes bullying from conflict. Behaviors used to assert such domination can include verbal harassment or threat, physical assault or coercion, and such acts may be directed repeatedly towards particular targets. Rationalizations for such behavior sometimes include differences of social class, race, religion, gender, sexual orientation, appearance, behavior, body language, personality, reputation, lineage, strength, size or ability. If bullying is done by a group, it is called mobbing. Bullying can be defined in many different ways. Bullying is divided into four basic types of abuse – emotional (sometimes called relational), verbal, physical, and cyber It typically involves subtle methods of coercion, such as intimidation.

Bullying ranges from one-on-one, individual bullying through to group bullying called mobbing, in which the bully may have one or more "lieutenants" who may seem to be willing to assist the primary bully in his or her bullying activities. Bullying in school and the workplace is also referred to as peer abuse.
A bullying culture can develop in any context in which humans interact with each other. This includes school, family, the workplace, home, and neighborhoods. In a 2012 study of male adolescent American football players, "the strongest predictor [of bullying] was the perception of whether the most influential male in a player's life would approve of the bullying behavior"
watch my psa video